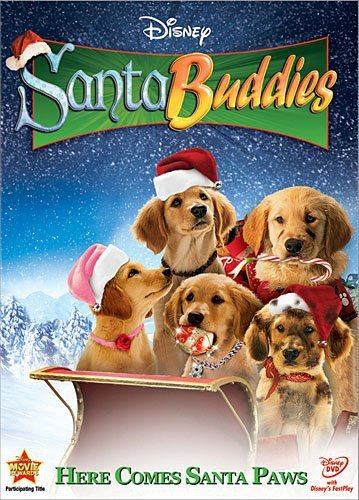 Brand : George Wendtchristopher Lloydrobert Vince
from USA
to Kenya
in 5-8 days
At your doorstep by Aug 04  to Aug 07 with standard delivery

Disneys' irresistible talking puppies star in four action-filled, heartwarming movies overflowing with adventure, humor and the power of teamwork. Join the hip-hoppin' B-Dawg, lovely Rosebud, mellow Buddha, dirt-loving Mudbud and the big fella, Budderball, for Buddy-loving fun your whole family will enjoy. .com ---- Christmas spirit is waning around the globe, and people are losing sight of the real meaning of Christmas. Up at the North Pole, Santa and his trusty dog Santa Paws are alarmed because the Christmas icicle, which is the source of Christmas magic, is melting. Even scarier is the fact that only Santa Paws's young pup Puppy Paws can spread the word about the importance of Christmas spirit to the new generation, but all he wants to do is be a normal dog. After looking at the naughty list, Puppy Paws hitches a ride to Fernfield, Washington, to catch up with Budderball and participate in what he perceives to be a more normal life. Budderball, B-Dawg, Rosebud, Mudbud, and Buddha all take a turn hosting Puppy Paws, but he doesn't seem to quite fit in with any one of them. While in Fernfield, Puppy Paws is shocked by the widespread disbelief in Santa Claus and Santa Paws as well as by the general lack of holiday spirit. He also gets a rude surprise when dogcatcher Stan Cruge grabs him and locks him behind bars in the local pound. It takes all of the Buddies working together with a special dog named Tiny and an elf-dog from the North Pole to save Puppy Paws and reignite the town's Christmas spirit, but will it be enough to save Christmas around the world? Santa Buddies features some nice songs and a good message, but the fully animated segments (especially those with the reindeer) are poorly rendered and give the production a low-budget, even amateurish feel. The film focuses more on the new Puppy Paws character than on the old Buddies gang, but brief scenes of Budderball gorging himself, Mudbud tracking dirt all over the house, B-Dawg dancing, Rosebud preening, and Buddha meditating are all viewers really need in this fourth Buddies film. While Santa Buddies may not be the most stimulating adult fare, children ages 3 to 10 will enjoy it while absorbing a sense that Christmas is about giving, not getting, and that one person can change the lives of many. Voice talent includes George Wendt, Christopher Lloyd, Josh Flitter, Zachary Gordon, and Kaitlyn Maher. Bonus features include three classic Christmas sing-along songs and Steve Rushton's music video "Santa Claus Is Coming to Town." --Tami Horiuchi See all Editorial Reviews ( /dp/product-description/B00267N3E0/ref=dp_proddesc_0?ie=UTF8&n=2625373011&s=movies-tv&isInIframe=0 )
Show More
Reviews

Movies And Tv › Holidays And Seasonal